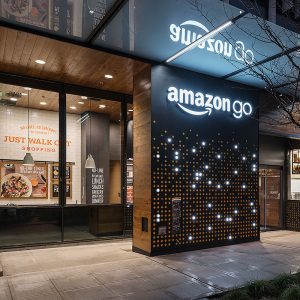 Last fall, Amazon introduced its Amazon One contactless biometric palm reader in Amazon Go stores. The system uses computer vision technology to record an image of a person’s palm and associate it with a credit card, offering a contactless payment option at the front of stores.

Now, Amazon plans to roll out the palm reader across most of their physical retail locations, including Amazon Go convenience stores, Amazon Go Grocery, Amazon Books and Amazon 4-star stores.

“We’re excited to see Amazon One in more retail environments and are in active discussions with several potential customers, but beyond that, we’ll have to ask you to stay tuned,” said Dilip Kumar, Vice President of Physical Retail and Technology at Amazon.

This isn’t the first time Amazon has dabbled in physical retail, either. In the past year alone, the e-commerce giant has introduced autonomous checkouts, brick-and-mortar store expansions, smart shopping carts, and more.

Amazon is consistently evolving their infrastructure to reinvent themselves and their name in retail. Now, things are about to change even more as Amazon enters a new era. Jeff Bezos recently stepped down as Amazon’s Chief Executive Officer to become Executive Chairman. Bezos has run the company since its founding in 1994. Andy Jassy, long-time company veteran, will take over as CEO.

Bezos announced his decision to step down in an internal letter to Amazon employees.

“We’ve done crazy things together and then made them normal. We pioneered customer reviews, 1-Click, personalized recommendations, Prime’s insanely-fast shipping, Just Walk Out shopping, the Climate Pledge, Kindle, Alexa, marketplace, infrastructure cloud computing, Career Choice, and much more. If you get it right, a few years after a surprising invention, the new thing has become normal. I don’t know of another company with an invention track record as good as Amazon’s, and I believe we are at our most inventive right now,” Bezos wrote.

Amazon is an inventive company that has consistently experimented with physical retail. Whether they are testing out physical store concepts of the infrastructure found in stores, they have made a significant effort to place their footprint in brick-and-mortar retail. Amazon has taken note that physical retail is alive and ready – something mainstream media may be missing.