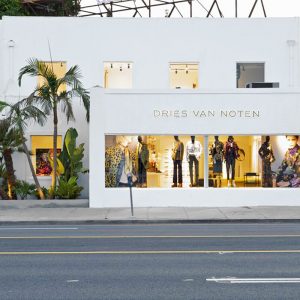 The current pandemic may have rattled the industry as we know it, but the brick-and-mortar landscape has continued to thrive in the US, with dozens of retailers expanding their footprints.

European retailers are quickly catching on to the tremendous growth opportunities and healthy performances numbers in the US for brick-and-mortar retail. And, some are taking advantage of it by opening physical stores in the US.

The Belgian-based luxury brand, Dries Van Noten, has hopped on the bandwagon. The retailer just recently opened their first standalone store in US. The 8,500 square-foot Los Angeles store is the brand’s largest location so far. This newest addition will join Dries Van Noten’s other flagships in Antwerp, Paris, Singapore, Hong Kong and Shanghai.

According to Van Noten, designer of the brand, the Los Angeles store will operate differently from the rest to keep up with the ever-changing brick-and-mortar landscape in America. The store will feature art exhibitions, performances, music, film screenings, and workshops, along with fashion and accessories collections that are showcased throughout the store.

“The idea is for it to be a very open space for creativity. You don’t always have to come to the store to buy garments, you can also come to discover something about food, art, music and other beautiful things,” said Van Noten.

Brands like Dries Van Noten are adapting experiential concepts in their brick-and-mortar settings in order to create more brand awareness. Store concepts are now being designed to incorporate marketing concepts, rather than solely promoting transactions.

Van Noten’s efforts to experiment with new approaches in retail starts with his Los Angeles concept. He did not state whether he would open more locations in the US, but he didn’t exclude the possibility of new opportunities.

Slowear, a Venetian high-end retailer, has also revealed plans for a global US expansion. The fashion company has opened their first US store in Chicago, with growth initiatives to include other locations such as New York, Los Angeles, and San Francisco.

Dries Van Noten and Slowear are two European retailers who have created momentous strides in brick-and-mortar retail, to make light of the current pandemic and take advantage of potential growth opportunities.

About Dries Van Noten
In 2007, Dries Van Noten opened his Paris boutique for women, followed in 2009 by a shop for both collections in Tokyo’ Aoyama district and in partnership with Tomorrowland. He debuted a shop for his collection for men in Paris also that year. In June 2008, the Council of Fashion Designers of America (CFDA) honoured Dries Van Noten with its International Designer of the Year Award. This was followed in December 2008 by the distinction of “Royal Designer for Industry” (RDI) from the RSA Trustee Board in London. In 2009, the Flemish Chamber of Commerce (VOKA) inducted Dries into the « Galerie des Eminents »; the Flemish Royal Academy of Belgium gifted him with the Gold Medal (“Gouden Penning”), and the Couture Council of the Museum at FIT in New-York honoured him with the “Couture Council Award for Artistry of Fashion”. In May 2010 Dries Van Noten was invited to preside over the 25th edition of the “Festival International de Mode et de Photographie” of Hyeres (France), and in 2014 he presided the jury of the 7th “A Shaded View on Fashion Film” Festival (ASVOFF).

About Slowear
Slowear is a family business concept and an Italian lifestyle project stemming from a long industrial history, combining four historic Italian fashion brands that share a high level of specialization. Slowear was built on this heritage of know-how and product-centric passion, and promotes a ‘durable’ fashion concept, featuring inner and outer qualities that make it immune to the passing of time and fleeting trends. This philosophy caters to a need that is becoming more and more urgent in the fashion industry: spreading a more ethical and sustainable consumption model.