Experience and community at the heart of physical retail, an unstoppable 2,000-year-old brick-and-mortar model 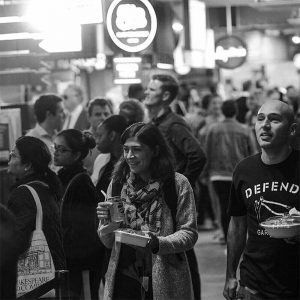 Urbanspace is a concept that creates immersive public markets – combining elements of creativity and community. Co-Founder and President at Urbanspace, Eldon Scott, started the company in London in 1973. In the last 25 years, the company has ventured to the US, specifically New York.

The core concept behind Urbanspace is to partner with small businesses and bring consumer-focused experiences to their markets. This partnership has brought significant brand recognition to these small, brick-and-mortar brands. Each business is brought to light and used to create a unifying space for consumers to interact and connect.

Scott and his team are focused on Urbanspace’s curation efforts – handpicked businesses that consumers will think are the best of the best. These companies are essential to the overall success of the markets, and will ultimately drive Urbanspace’s core theme – community.

Urbanspace focuses on an omnichannel approach – blending physical and digital. However, the actual markets themselves are all about people.

Urbanspace’s model has proven to be successful over its last few decades of success. The company provides a space besides work and home that allows consumers to venture out – a third place. Their neighboring markets are filled with a vastly diverse blend of individuals.

E-commerce has never been a prime competitor for Urbanspace. Each of their selling capabilities cater to completely different audiences. Urbanspace market’s bring a whole other element to retail – igniting people in one space. E-commerce options, such as Amazon, are not providing that same feeling – it is a straightforward buying option, that does not provoke the same emotions as a neighborhood experience.

Urbanspace shares a similar concept to malls around the world – both provide a setting to curate products, services and experiences. The core principal behind both of these places is community, where each strive to strengthen human connections, even in difficult times.

Retail has been around for over 2,000 years and its foundation has never changed. Humans need to interact with other people in brick-and-mortar spaces. A physical-first philosophy is a powerful mindset that numerous brands had adopted, even amongst a digital-first movement. It’s important to know we are all physical beings that are craving experiences with others, and this will become even more heightened after the pandemic is over.

Not only that, but there have been numerous studies that point to the fact that consumers are craving elements of the physical shopping, according to a survey from Klarna. The hidden costs of e-commerce are fueling profit erosion, causing frictions for a variety of companies. This has caused direct-to-consumer brands to move into the brick-and-mortar realm.

Digital will never replace the physical elements that brick-and-mortar retail provides. Instead, brands have adopted an omnichannel approach to give the power to consumers. Experiences and community live at the heart of retail, and this has been an unstoppable force for 2,000 years that will carry on in the foreseeable future.