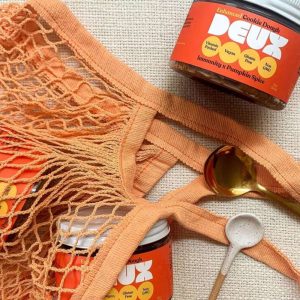 Instagram startup Deux, was created last year as a sole online retailer – with social media as their main platform. The cookie dough brand has seen massive success in the market, recently closing $1 million in seed round, according to founder and CEO Sabeena Ladha.

As the brand looks to expand and grow, brick and mortar is top-of-mind. Company execs expect that physical retailers will be a major sales driver for Deux in the future.

The company has increased its overall sales by 600% over the past six months. And now, has become a top-selling dessert option at Erewhon’s Market, an upscale health food store located in Los Angeles. Deux’s and Erewhon’s brand identities blended seamlessly when the two decided to collaborate in a brick-and-mortar setting. They both take pride in clean ingredients and great tasting products.

Deux has stayed ahead during the pandemic, creating enhanced versions of their products to cater to market trends.

“The trend of people getting into the immunity sector was gaining momentum, and I thought ‘what if we add all the immunity vitamins into mini chocolate chip cookies’?” Ladha said, noting a saturated cookies aisle filled with gluten-and grain-free options ultimately drove her to reinvent the relatively less competitive cookie dough sector.

With its whirlwind success on social media, it’s not a surprise that the company wants to expand their physical footprint. Currently, Deux is in talks with Whole Foods and Sprouts for potential partnerships. This collaboration could introduce this brand to a wide scale of audiences, and would follow in the footsteps of plenty of other direct-to-consumer brands that have moved offline. Going beyond an Instagram feed will allow Deux to reach new heights in the health food sector and showcase their nutrient-rich products in a new light.

“I forecast we’ll do about $1 million in sales in our first year, and somewhere between $3 million to $5 million depends on our retail growth,” Ladha said.