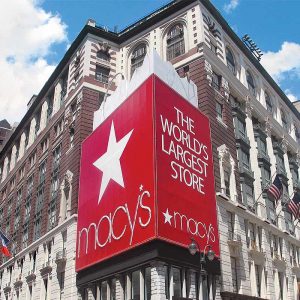 Macy’s growth initiative for their Backstage stores has just begun. The department store retailer plans to open 45 shops in 10 different states this year. This push will bring Macy’s one step closer to its goal of 270 locations nationwide.

This is 10 more stores than Macy’s originally planned for their brick-and-mortar footprint. The company also wants to open more stand-alone Backstage locations, in addition to their 2021 expansion plans.

Throughout the pandemic, Backstage was a leading retail performer for Macy’s. It’s off-price business model sparked interest among consumers.

“It was one of the major successes for us all the way — before the pandemic, through the pandemic and now post-pandemic. So when you look at Backstage, it’s performing exceptionally well. … Based on that we’re adding more than we initially anticipated. We’re adding 45 new store within stores in 2021. We’re also now going back to adding freestanding Backstage stores that we started back in 2015,” said Jeff Gennette, Macy’s Chief Executive Officer.

A key part of Macy’s growth plans is their recent investment in their Herald Square flagship. The company will fully upgrade their store model to exhibit an urban space with upgraded subway access and improve transit connections. Macy’s store revival will be an opportunity for the brand to work with the community and make an impact on the local neighborhoods.

“Macy’s Herald Square is one of New York City’s most iconic institutions, and, as we plan for the future, we are doubling down on our commitment to New York by reinvesting in our flagship location while committing $235 million in private investment to upgrade the Herald Square neighborhood through our tower project. We are proud to make this leadership investment in New York’s recovery and are excited to welcome visitors back to Herald Square not only today, but for generations to come,” said Gennette.

About Macy’s, Inc.
Macy’s, Inc. (NYSE: M) is one of the nation’s premier omnichannel retailers. Headquartered in New York City, the company comprises three retail brands: Macy’s, Bloomingdale’s and Bluemercury. With a robust e-commerce business, rich mobile experience and a national stores footprint, our customers can shop the way they live — anytime and through any channel. For more information, visit macysinc.com.