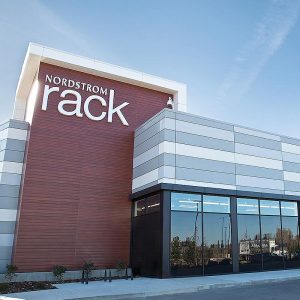 Nordstrom Rack began as a way to clear out end-of-season inventory in the basement of a downtown Seattle Nordstrom store. As time progressed, Nordstrom Rack became a key player as an off-price retailer, and a huge acquisition source to new customers exploring the Nordstrom brand.

Nordstrom and Nordstrom Rack work together as an integrated entity, to leverage physical and digital elements to provide convenience to consumers.

“We look at the business holistically, and we look for ways in which we can deliver the best product to the best customer, in the ways that they want to receive it, whether that’s in a mobile app or on the website, or in one of our stores,” said Nordstrom Rack President Geevy Thomas during a keynote conversation with CNBC.

Each of Nordstrom’s entities cater to different audiences, however the company has learned the ebbs and flows based on the current market. When the company opened its flagship Nordstrom Rack store across from the original Nordstrom location in Seattle, it had its best year ever and created a synergy between the two. Nordstrom Rack locations that have another Nordstrom store nearby typically perform the best within their portfolio.

“It’s because Rack attracts a lot of customers. And so, when they come to visit the Rack store, they will make their way across the street to the full-line store, and vice versa. It creates this synergistic thing that we think is really unique in our space,” Thomas said.

Over the next 5 years, the brand hopes to grow Nordstrom Rack by $2 billion to capitalize on the aggressive season in off-price retail. In 2010, Nordstrom Rack was roughly a $1.3 billion operation, and it has grown nearly $2 billion every five years since. This next chapter will include opportunities to expand physical footprints and digital advancements.

Nordstrom Rack has a competitive advantage as well, being the only off-price retailer that has a full omnichannel experience to compliment their physical locations.

“We believe that by leveraging the kind of breadth that the online business gives us to widen our aperture on price and the ability to bring easy returns to stores – in fact, 83 percent of our online returns come back to Rack stores – it’s the combination of all of those things that is going to enable us to get to that next $2 billion. Including, we believe, opening more Rack stores, as we have over the last several years,” added Thomas.

Allowing consumers to make online returns in brick-and-mortar stores is crucial for shopper convenience. Online returns have experienced all-time highs within the last year during the height of the pandemic, and it has caused major frictions for e-commerce. Enabling next-day BOPIS, ship to store capabilities, and having the ability for Nordstrom.com items to be shipped to and returned to Nordstrom Rack locations helped to combat these frictions.

Nordstrom Rack hopes to serve communities of large and small communities, bringing a thoughtful approach to their physical footprint. Instead of limiting stores to markets of 50,000-500,000 people, the brand has found suburb communities to be just as successful.

“And we look forward to serving those customers, and bringing the digital and physical together for them, wherever they live,” Thomas said.

About Nordstrom, Inc.
Nordstrom, Inc. is a leading fashion retailer based in the U.S. Founded in 1901 as a shoe store in Seattle, today Nordstrom operates 358 stores in the U.S. and Canada, including 100 Nordstrom stores; 249 Nordstrom Rack stores; two clearance stores; and seven Nordstrom Local service hubs. Additionally, customers are served online through Nordstrom.com, Nordstrom.ca, Nordstromrack.com, HauteLook.com and TrunkClub.com. Nordstrom, Inc.’s common stock is publicly traded on the NYSE under the symbol JWN.